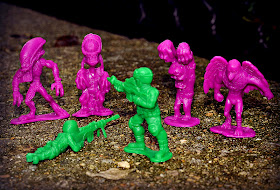 Has anyone else noticed that '80s-style bags/buckets of cheap plastic figures have made a little bit of a comeback? For years they seemed to be just a memory of junk stores and drug stores of the past, and then all of a sudden there's the True Legends buckets sold at Toys R Us, Imperial zombies vs. zombie hunters, Tim-Mee Toys reissues, Space War and others. I'm not sure what's going with that, but I'm not complaining. I say bring on these chintzy little weirdos by the bucket-loads.

On my latest trip to Target, yet another new release of this kind caught my eye. I noticed them along the back wall of the toy section hanging out with the other small, misfit toys. I saw they were called "Battle Warriors" and came in clear tube containers with twist-off caps, and that there were two assortments: Monsters vs. Military and Robots vs. Ninjas. I of course quickly grabbed the monster bucket to get a closer look, and made the decision to purchase it in about four seconds after seeing that the monster sculpts looked pretty damn cool and came in a great neon purple color (think the neon purple from Monster in My Pocket). Plus, it was only five bucks. 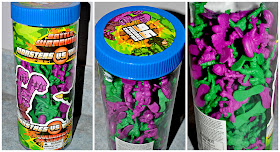 The tube contains 96 figures, half being the purple monsters and half being green army guys. Each half includes six different sculpts, so there's 12 sculpts total. Considering the amount of figures in the tube, you get a bunch of duplicates of each one. The army guys are decent and have some nice variety in poses, but not surprisingly, the real draw is the monsters. The creators of these (Blip Toys, the people behind Squinkies) actually put some thought into offering a good variety of designs for the baddies instead of taking the lazy route and making them all look like zombies (it seems like a lot of toy companies these days forget that there are monsters other than zombies). Here's all of the sculpts in the set:

As you can see, we've only got one zombie here. The other weirdos include a crazy Frankenstein's monster dude with huge arms, a shark-man, a bird-man, a Xenomorph-style alien, and a sludgy cyclops thing which kind of looks like one of the Oh No! Aliens. I really like how they're all very different, and the sculpts are nicely done for this type of cheap toy set. The figures are around 1.5 inches tall and are made of a light, hard plastic, but the material also has some give to it so you can bend parts without having to worry about them cracking easily. The only thing I wish is that the monsters came in more than one color--that way it would be much more worthwhile getting a bunch of the same sculpts in each tube. But for five dollars, this set is well worth picking up for any lover of little weirdos. In fact, I'm pretty tempted to get the Robots vs. Ninjas set now.